Born from a sinister plot of the Fial Darg the plans of the Convocation ritual were planted on purpose to break the dark princes' imprisonment.
"We knew not...

And so we fought, fought until in our ignorance we brought about the end of the old age. Senseless wars were waged under the reign of the Circle; so blinded were we in our constant quest for power that we did not foresee what was to come, could not comprehend the fate we had sealed for our world. As the shadow fell upon the Eye of Aonir, the Masters of the Elements, answering the call of the Thirteen, cast off their bonds and roamed free. Their power and rage unleashed, the ancient Elements once again began to fight amongst themselves, as they have since the beginning of time.

In their anger, the Elements heedlessly ravaged the face of the world. The earth burst open and its glowing blood flowed freely over the land. Columns of fire stretched toward the sky, up to the maelstrom of black clouds that seemed to swallow the horizon. Scorching storms of ash and poison upheaved even the highest mountains and ground them to dust. The oceans began to boil, greedily tearing away at the coasts.

One day and one night the rage of the Elements lasted, before the shadow passed. Then they were banished, just as they had been once before, and a deathly silence fell upon a scarred world.

Only a few of us managed to seek shelter by the Stones. There we lay; some crying to, others cursing the Gods that had let this happen. Yet we were blind, refused to accept the obvious truth… we were to blame.

For we knew not…"

In ancient times before the creation of the world of Eo, Aonir, the All-Father, tamed the primal elements and thus brought the world Eo to be. Still those ancient powers were not banned from the world but only under the power of Aonir laid to sleep.

Ages after the Fial Darg waged war upon the people of light but by the power of the guardian gods they and their followers were defeated. Standing at the brink of destruction the Fial Darg created a trap to bring entire annihilation to the world: In an old ruin they left a text which promised almightiness and the power to rule the Elements. The text said that at a specific time, the Eye of Aonir is darkened by the dark roamer and his power over the elements is weakened. A mighty mage who summoned the elements could now gain power over them.

The Circle being founded

In later times the thirteen mightiest mages of the world joined together to form the Circle. At first it was the idea to bring an end to the intrigues, mages always had created in all times to multiply their own power. But also to bring peace to the people in the aftermath of the Mage Wars and led the Circle, which was even respected by the followors of the dark gods, a golden age begun.

But soon the Circle became what it originally should prohibit: A centre of power which the circle mages used for their own good. They soon learned about the Allfire, which embodied in the Phoenix they trapped in a stone. The Allfire enlarged their power beyond imagination and extended their life to a span, that they could be called immortal.

The trap strikes the Circle

About 500 years after the creation of the Circle, somehow the Circle got knowledge of the instruction left by the Fial Darg. In their lust for power, each of the mages tried to win this power alone and thus they started to battle each other. The Convocation Wars had begun. Huge armies of rune warriors, but also demons and undead, brought desolation into the world and the day of the eclipse drew near.

When the Eye of Aonir was darkened, the circle mages called upon the elements but none of them had the power to tame them. The Elementes roared and ravaged, ash raining from heavens, the earth spilled blood, and the continents were shattered. 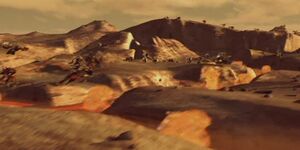 The Primal Elements had resurfaced due to the Circle's rituals and were tearing the world apart.
Add a photo to this gallery

Most of the thirteen mages died in the tumults and the face of the world was changed forever. Only where the sacred obelisks of Aonir, the Godstones, stood, small islands remained amidst all the havoc. And the lands left behind after the cataclysm were in chaos. Only with huge efforts stability could be restored.

Retrieved from "https://spellforce.fandom.com/wiki/Convocation?oldid=21093"
Community content is available under CC-BY-SA unless otherwise noted.